He wasn’t an art-lover, but an art-missionary – Habertürk

Famed businessman and collector Nahit Kabakçı has recently passed away in Baku. A real art-enthusiast and idealist, Kabakçı had estranged himself from active business life and become devoted to his collection. 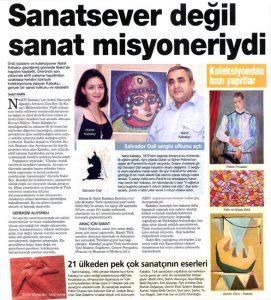 Nahit Kabakçı’s grandfather Hacızade Ağaoğlu Arnavut Ziya was one of the first members of Kuvayı Milliye (National Forces). Kuvayı Milliye had become the hope of Anatolia that had been left vulnerable after the discharge of Turkish army and crushed under the cruelty of Allied Forces. As you got to know Nahit Kabakçı, you understood that these efforts were shifted from one front to the other, shaped by the requisites of the modern times but remained strikingly faithful to its objective. Kabakçı, who put his signature under cardinal projects in Azarbaijan as the Board Chairman of Ramko, had gradually pulled away from his active business life and become devoted to his collection.

In our interview, Mr. Nahit said, “Nations should get to know their own works by themselves. Leaders of art in Europe and the world have done so and they created, acquired their own area.” He considered himself not a collector, an art-lover but a missionary. He admitted that museum directors and curators will not attempt to search for Turkish works, and a missionary will have to introduce our art to them. He had undertaken this arduous task and carried the flag.

HE’D TOOK WHAT WAS NECESSARY

He had been working with a trusted team of critics and museum managers who had a say in Europe on the matter of art. His aim was to select, support, refine and add value to such art works for his collection that would survive long years and remain valuable. He did not take what was easy to get, but what had to be taken for the completion of the collection. Hüma & Nahit Kabakçı Collection included almost 80 Turkish artists. The objective of Nahit was having 50 artists, then only 15 artists after an elimination process so to reinforce the concept by reserving space only to those artists who are the “best” representatives of respective movements.

Nahit Kabakçı made art not as art but art as object. His dream was introducing Turkish art to the world and becoming the source of pride for Turks at all corners of the world. Kabakçı believed that there should be no barriers preventing Turkish art from getting exposure in Tate Modern (UK), Centre Pompidou (France) and Museum of Modern Art (USA).

Kabakçı was not satisfied by increasing the audience and its own quality to render the concept more exhaustive, he also intended to extend the territory with all areas where Turks exist, and include representatives of Turki countries. He wanted to step up his target.

Nahit has passed away 2 months after our interview. He was one of those people who attempted to light a candle, instead of complaining of the darkness.

Nahit Kabakçı was studying engineering in Germany by the beginning of 1970s. In the meantime, Güher and Süher Pekinel sisters were studying music in Frankfurt. A Salvador Dali exhibition where he went upon their recommendation has changed the flow of his life. With this exhibition he became interested in the painting art. One day, he changed his mind of buying a 6 thousand Mark worth Dali painting showcased in Frankfurt. He chose to spend that money with his girlfriend in Paris. Years after, Kabakçı has told this event in an interview, “That fun weekend made me lost 5 million dollars of today’s worth,” because that painting was sold for 5 million dollars.

Works of many artists from 21 countries

A Farewell to Nahit Kabakcı… – Cumhuriyet

A Farewell to Nahit Kabakcı… – Cumhuriyet