The cow consciously stares at the spectator from inside a pink circle. Sultan Selim can only be noticed after taking a second look: As a stain on the side of cow’s torso. Turkish artist Erinç Seymen wittily offers a satire of traditions prevailing in his country with the mosaic art work made of spangles. Turning an oppressive ruler and a conqueror into an animal decoration is surely a satire. On the other hand, Selim had considered himself to be in the service of God to such a great degree, that he used to wear an earring like slaves and servants. And cow is not recognized as a holy animal in India alone. This untitled work dated 2008, is a well-suited contribution to contemporary Turkish art both in its wit and application.

Although Turks have their place in the daily lives of Germans, Turkish art is rarely known in our country. Capital of Culture makes the passionate project of Karl Ernst Osthaus Museum in Hagen possible. The museum displays a slice of Turkish art from 1950s to today. Museum Director Tayfun Belgin emphasizes the “Istanbul” exhibition as the first of its kind ever organized in Europe. Huma Kabakçı collection collected by entrepreneur Nahit Kabakçı of Istanbul since 1970 and named after his 20-year old daughter is on display. About 110 paintings of 50 artists and almost 60 photographs of Ara Güler offer a glimpse of contemporary trends in Bosporus. With a stunning understanding.

Early post-war era examples may have also originated from Germany or France. Turkish artists kept up with international trends of the era. For instance Nedim Günsür had studied in Paris accompanied by Fernand Leger among others and employed star, moon and flower motifs in his work titled “Abstract Compositions” (1949), following the footsteps of Matisse. Artists like Ferruh Başağa and Fahr-El Nissa Zeid had been working with the expressional repertoire of informal art. This type of physical painter-work still remains today as is shown in the two works dated 1990 of Zeki Arslan who lives in Lippstadt. Turkish peculiarities in the art can emerge in the details: Zeid’s untitled work from 1950 reminds oriental mosaics. But this may well be the projection of the onlooker.

Such elements are clearly visible in the contemporary artworks. For instance Murat Morova worked on idle elements of Ottoman miniature painting and Arab calligraphy in his two-winged painting called “the Forgotten Landscape” (2007) This can also be seen today, in the paintings of Kezban Arca Batıbeki. Titled “Woman, unnamed” (2008), the painting depicts the eyes of a woman wearing burqa; her painting “Hush, don’t speak” (2007) shows a ballerina with her mouth tied up –as a reflex against patriarchal society. Artist Ardan Özmenoğlu writes “Gone for Friday pray, will be right back” (2008). This is a writing widely seen on store windows situated near a mosque: “I’m gone for Friday pray, I will be right back.” This constant message which remains unattached to any current event shows the mainstream humor –collector who deceased in fall loved this piece the most.

1978-born Güçlü Öztekin is present in the exhibition with 15 paintings, creating graphic-featured Pop Art-inspired works, which seamlessly comply with the global trends of art. “Memur” (Civil Servant, 2007) shows heads instead of ears, as the feature of an obedient character. “Hayvan” (Animal, 2008) titled work features an airplane violently dashing off out the painting together with sun beams.

Ara Güler photography can be enjoyed particularly. Classical black & white photographs track the modernization process of Istanbul, the metropolis of millions. Motifs including a horse car crossing the tram road (1956) have become the classics. These impressions of these striking photographs can be enjoyed with enlarged prints. 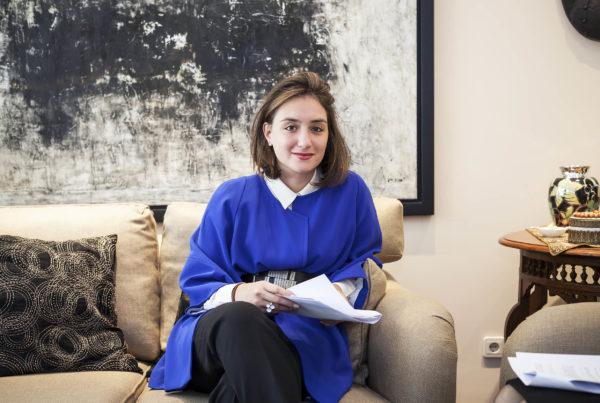